MySQL Features
the open source MySQL Community Server and the proprietary Enterprise Server.MySQL Enterprise Server is differentiated by a series of proprietary extensions which install as server plugins, but otherwise shares the version numbering system and is built from the same code base.

MySQL History
MySQL was created by a Swedish company, MySQL AB, founded by David Axmark, Allan Larsson and Michael “Monty” Widenius. The first version of MySQL appeared on 23 May 1995. It was initially created for personal usage from mSQL based on the low-level language ISAM, which the creators considered too slow and inflexible. They created a new SQL interface, while keeping the same API as mSQL. By keeping the API consistent with the mSQL system, many developers were able to use MySQL instead of the (proprietarily licensed) mSQL antecedent. 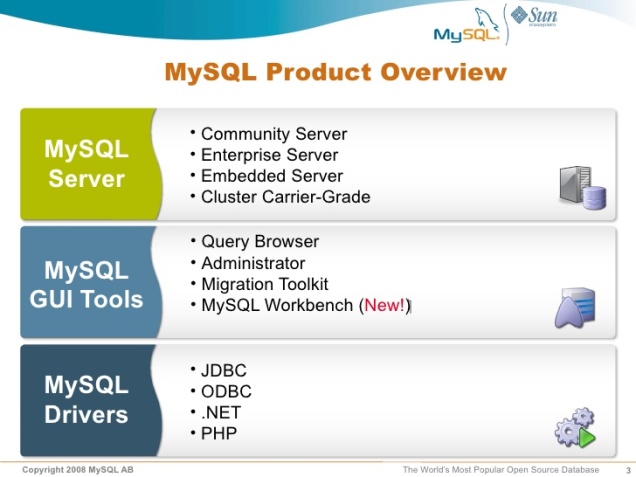 The MySQL server software itself and the client libraries use dual-licensing distribution. They are offered under GPL version 2,beginning from 28 June 2000(which in 2009 has been extended with a FLOSS License Exception)[26] or to use a proprietary license.

Support can be obtained from the official manual.Free support additionally is available in different IRC channels and forums. Oracle offers paid support via its MySQL Enterprise products. They differ in the scope of services and in price. Additionally, a number of third party organisations exist to provide support and services.

What is MySQL
MySQL (officially pronounced as /maɪ ˌɛskjuːˈɛl/ “My S-Q-L”) is an open-source relational database management system (RDBMS);in July 2013, it was the world’s second most[a] widely used RDBMS, and the most widely used open-source client–server model RDBMS.It is named after co-founder Michael Widenius’s daughter, The SQL acronym stands for Structured Query Language. The MySQL development project has made its source code available under the terms of the GNU General Public License, as well as under a variety of proprietary agreements.

MySQL was owned and sponsored by a single for-profit firm, the Swedish company MySQL AB, now owned by Oracle Corporation.For proprietary use, several paid editions are available, and offer additional functionality.
MySQL is a popular choice of database for use in web applications, and is a central component of the widely used LAMP open source web application software stack (and other “AMP” stacks). LAMP is an acronym for “Linux, Apache, MySQL, Perl/PHP/Python.” Free-software-open source projects that require a full-featured database management system often use MySQL. Applications that use the MySQL database include: TYPO3, MODx, Joomla, WordPress, phpBB, MyBB, Drupal and other software.MySQL is also used in many high-profile, large-scale.