MikroTik
Mikrotīkls SIA, known internationally as MikroTik, is a Latvian manufacturer of computer networking equipment. It sells wireless products and routers. The company was founded in 1996, with the intent to sell in the emerging wireless technology market. As of 2015, the company has more than 160 employees. The company’s products are known for being low-priced alternatives to expensive routers and Ethernet radio relay lines.

RouterOS
The main product of MikroTik is an operating system based on the Linux kernel, known as the MikroTik RouterOS. Installed on the company’s proprietary hardware (RouterBOARD series), or on standard x86-based computers, it turns a computer into a network router and implements various additional features, such as firewalling, virtual private network (VPN) service and client, bandwidth shaping and quality of service, wireless access point functions and other commonly used features when interconnecting networks. The system is also able to serve as a captive-portal-based hotspot system.

The operating system is licensed in increasing service levels, each releasing more of the available RouterOS features. A MS Windows application called Winbox provides a graphical user interface for the RouterOS configuration and monitoring, but RouterOS also allows access via FTP, telnet, and secure shell (SSH). An application programming interface is available for direct access from applications for management and monitoring. 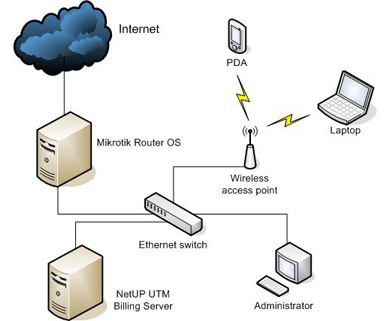